What is more Texas than an armadillo? Well, maybe . . the lone star, the yellow rose, boots, jalapeno peppers, mesquite trees but . . armadillos are pretty much a part of Texas too. I think they’re pretty much detested by everyone who has had to deal with them. My grandma’s house was up off the ground just a bit and armadillos would get up under there at night and bump around and scare me half to death when I was a kid. But, you know . . it never takes much to scare me.  In MO, I had some tearing up my yard and ended up . . well, that’s a story that probably shouldn’t be shared on the blog. No, I didn’t shoot them and no, the police tried to shoot them with pepper spray (which I doubt would have really solved my armadillo problem but kept me from getting arrested since I lived in town and couldn’t shoot a gun in town) but they scampered into the woods and have now probably had dozens of offspring and are digging up all the yards in the neighborhood.

Anyway . . why would a school choose the lowly armadillo as their mascot? Beats me! 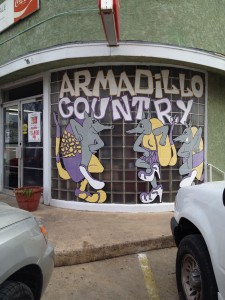 San Saba . . they have the armadillo as their mascot. They’re proud too! There’s some kind of huge metal art armadillo in front of the school, many of the businesses have armadillo “art” in their windows.

I guess I’ve heard of worse but it makes me proud to have been a Westlake Ram!  🙂