Sometimes I’m almost embarrassed to share recipes because they’re so simple but when you ask, I’ll share! 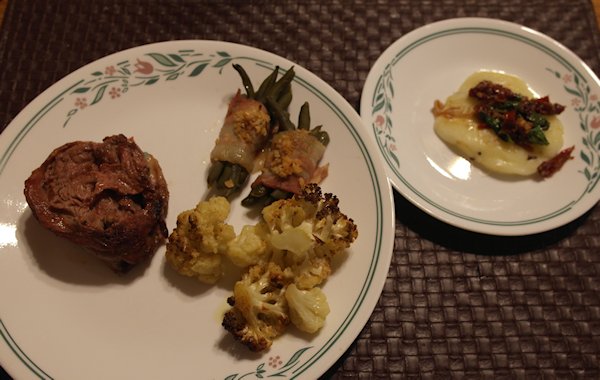 I don’t have a separate picture of the roasted cauliflower so that’s the photo from last night’s dinner.

I prefer cooking this in the Nesco Roaster with the convection. The fan browns it up real quickly without cooking it so long that it’s mushy.

Cut the cauliflower from the head and trim as much of the stem as you want to remove. Wash and dry well. I usually wash it early in the day and put it in a zipper bag with a couple of paper towels or even a clean dish towel, shake it and leave it in the fridge for a few hours.

Place the cauliflower in a large bowl, drizzle with olive oil, add seasoned salt, black pepper and onion powder to taste. Place in a shallow bowl and bake at 375º for 20-25 minutes. During the last 5-8 minutes, turn on the convection fan, which will speed up cooking and browning.