Sometimes I come across a knitting pattern that makes me want to drop everything and start that project. OK . . I know what you’re saying . . I tend to get overly excited about everything but seriously, I saw the Miss Grace Shawl and I wanted to knit it NOW and I haven’t stopped thinking about it since I found it last weekend. I showed the pattern to a friend in our knitting group Tuesday and she wants to knit it too.

If you go to the projects pages on Ravelry, you’ll see about 300 projects. I searched through those to find the ones I love and then I tried to base my yarn choices on the three skeins used in the projects I like best. I wasn’t trying to use the exact same yarns or colors but trying to get a feel for how the yarns worked together . . blending, etc. I didn’t want three solids. I was thinking a striping yarn and tonal yarns maybe. 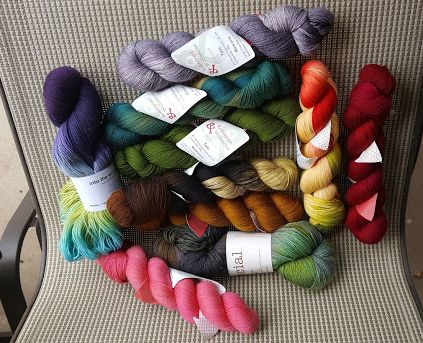 It was nice to grab three skeins and walk away with a decision made quickly. NOT! Darn . . I struggle with this. I don’t want colors that are matchy matchy because you lose the lines but I don’t want colors that cause people to say “Is she blind?” Well, yes, thank you for asking . . I am probably needing to have cataract surgery in the next year or so.

Seriously, how on earth do you choose? When I looked at some of the projects I liked best, the colors in the skeins were so different from what I expected. Some used three skeins of wildly variegated/striping yarns and they worked so well.

I’m going to post these in order of likelihood of me using the combinations shown . . which means nothing because an hour from now, I will totally have changed my mind. I’m so very thankful we don’t have a yarn shop nearby . . and Vince and the credit card . . they’re both thankful too. 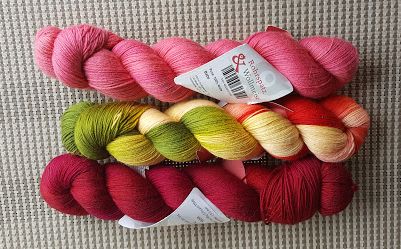 The red solidish is more burgundy than the red in the middle skein but there is a bit of that color and I wouldn’t want to match them perfectly. I’ve been so in love with pink lately, despite my total disagreement for all this pink hats that are everywhere! These are all three Wollmeise Pure. It makes me happy to use all the same base and not mix bases. 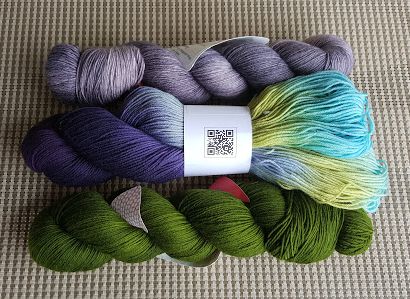 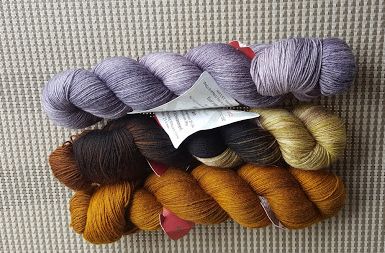 I like this one and I might even substitute the green in #2 for the gray but there is some gray in the greenish end of the middle skein and I was hoping to bring that out a little. I like the gray because it’s more tonal than either the green or the gold. Again, three skeins of Wollmeise so it’s the same base. 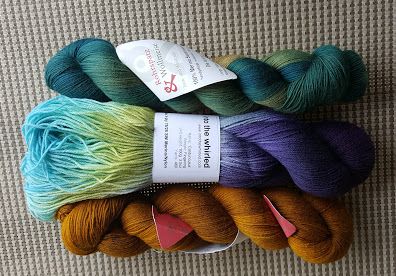 Again, two Wollmeise skeins on the outside and the Into the Whirled skein in the middle. I think I would like the tones in the top yarn instead of having a solid. If I substituted the middle skeins from #3 and #4, I might like that combination too.

I’m still thinking Choice #1 would be the most fun to knit but I doubt there is one pink thing in my closet. Oh well . . I feel a shopping trip coming on!

I wonder how hard it would be to block myself from Ravelry. We have company coming this weekend and the last thing I need to do is think about knitting. In fact, the ONLY thing I need to be doing is cleaning house . . the least fun project of all.  🙁