Chaos reigns in everything I’ve done all morning. 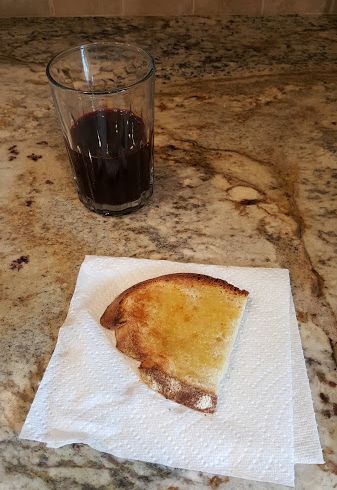 Almost 10 a.m. and there sits my breakfast . . where it’s been sitting for over 3 hours simply because I haven’t taken time to eat. Yummy! And, as you probably know, it only takes a minute to scarf down a little piece of toast and half a glass of beet juice.

I should go back to bed but I won’t. It’s my own fault. First thing, I went over to the sewing room as soon as Vince left, dogs were walked, chickens were taken care of, greenhouse was opened up and cats were fed and given as much attention as they wanted. But, when I walked into the sewing room, there was yarn everywhere. Boots had a grand time last night. I figured with all the yarn I had been pulling and playing with, I had left some out but no . . I have Rubbermaid totes stacked four deep and I had put one more box of yarn on top of one stack yesterday and it wasn’t steady and Boots, wanting to be at the highest point, must have jumped up there and the top three tubs fell and opened up. Party in the sewing room last night for Boots!  🙁

We have company coming and besides having too much stuff in too small of a house, having a dog that sheds 200% of her body hair on the hour ever hour (Rita),  not being the best housekeeper to start with, having the garden take up some of my time and my non-stop desire to sit and knit, this house is a total disaster. I’m trying to clean what people see so why did I decide to clean out the cabinets? I have no idea . . except I should probably be the poster child for ADHD. While standing in a chair, which I shouldn’t be doing while home alone, I reached for a 5 pound bag of flour in the top cabinet, which isn’t where it should have been anyway (probably from my last hasty cleaning spree) and dropped it on the dark wood floor. The bag split, flour went everywhere. Do you have any idea how far 5 pounds of flour can spread and what it looks like when a chihuahua comes running through to see why I screamed?

The good news is: Lunch is in the pressure cooker and it smells amazing. Kombucha is brewing and so far, I haven’t burned myself or broken my kombucha jar . . but I’m not done yet.