Don’t get me wrong . . I’m not complaining that we didn’t get the storm. Having grown up in an area with hurricanes, I learned that you take every threat as if it’s 100% going to happen. This time of  year, in so many places, including Texas, storms can be violent and destructive.

For over a week the weather forecasts were focused on Tuesday evening/night severe storms. I had been saying “I’ll hope for the best” with the garden but yesterday morning when I got up, I felt like I had to do something to protect the garden.

I grabbed my little wagon and loaded it up with half a bale of straw, which is about all I can get out to the garden without dropping half of it. 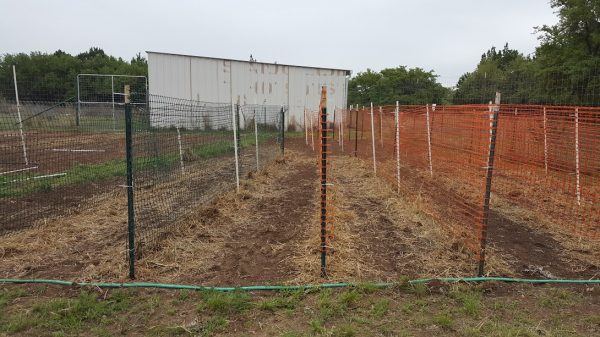 Storms can bring 5 or 6 inches of rain in a short period and the garden sits on the slightest slope. We never even noticed it til a year or go ago we had a huge rain and all my seeds I had planted ended up at the bottom of the incline. With the implement shed uphill from one end of the garden, I figured it would block too much water from rushing down but since I had planted several different kinds of beans and some of them were from friends and couldn’t be replaced this year, I covered the seeds on the lower end of the slope with straw. I figured that’s where the water would come down the most. The other seeds I have planted which haven’t sprouted yet are beets, okra and watermelon and I could easily replant all those so I didn’t worry about them.

I was running short on time because yesterday was my group knitting day. Priorities!  🙂

Then I covered the small tomatoes and pepper plants. I was hoping to protect them from hail but knowing that hail will go through most anything, I doubted my efforts were going to accomplish much if we had huge hail. I didn’t try to do anything with the bigger plants. 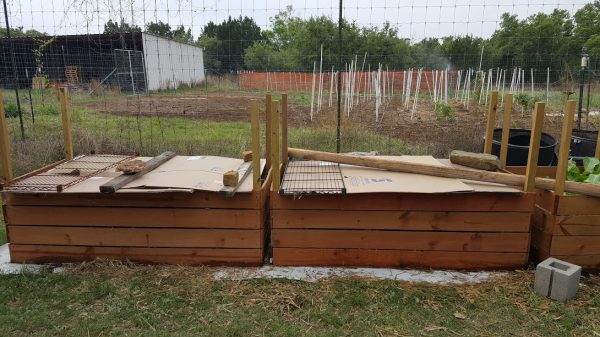 Next, I put layers of very thick cardboard over the top of the potato bins and did my best to secure them to keep them from blowing off. You can see that in the background I had sprinklers going try to wet down the straw on the beans and tomatoes to keep it from blowing off.

I did what I could and even though, had a severe storm come through here, my efforts probably would not have helped much, it made me feel better knowing I at least tried.

Here’s what we ended up with — 1/2″or rain! No wind, no hail, not much thunder. The worst of the storms stayed north of us.

As I was working in the garden yesterday morning, I thought of my grandparents and how they would watch the evening news to hear the weather forecast. I feel so lucky to be living in a day when I can get online any time, watch the radar and know exactly what the weather’s doing, whether at our house, at Chad’s in MO or at my family’s place in Louisiana.

I’m thankful for the half inch of rain, though I wish we had gotten a bit more. I’m thankful we didn’t get the scary weather and I feel bad for those who did. I’ll go out and uncover the potatoes and rake the straw away from the plants after the sun dried up a bit of moisture. It’s spring . . it’s just a matter of time before the next storm warnings come so I won’t put away the straw or supplies to cover the potatoes.